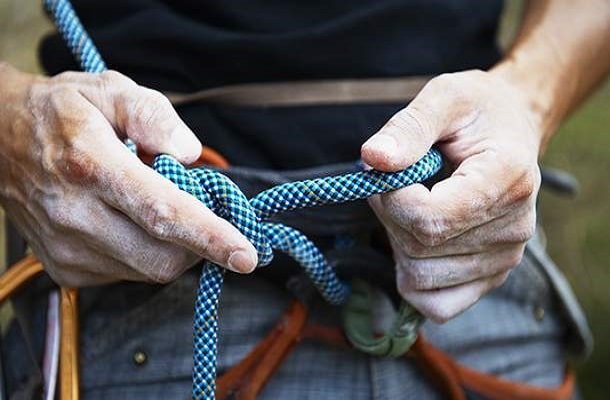 Today we talk about the Swiss Seat – the oldest emergency rappelling harness.

I just can’t stop talking about rappelling and climbing safety lately. I just feel that it’s the most important thing to consider for any climber, no matter his experience level. So as I was thinking about safety tips and what I should write about, I suddenly remembered the Swiss Seat and its incredible life-saving potential.

The Swiss Seat is one of the oldest emergency rappelling knots, and while it’s definitely not as safe as a conventional harness, it has the potential to save your life. Tying a Swiss Seat is not exactly rocket science, but get one part wrong and you could end up in a bad way.

What is a Swiss Seat anyway?

It’s difficult to find out where the Swiss Seat originated, but I’d say that the technique is at least a few centuries old. Before modern rappelling equipment became standard, climbers had to get creative if they wanted to come down safely. Of course, some rappelling techniques surfaced, some of which relied on nothing more than just a rope. You can find out more about these techniques in the rappelling rope guide I wrote not too long ago. Make sure to check it out if you’re interested in the subject.

While climbers experimented with various webbing-based harnesses, two of them stood out from the rest. I’m talking about the Swiss Seat and the Swami Belt, each featuring their own drawbacks and advantages. The Swiss Seat eventually overtook the Swami Belt in terms of popularity, but that doesn’t mean that the Swami Belt just faded out of existence.

What is the difference between a Swiss Seat and a Swami Belt?

At a glance, the Swiss Seat appears considerably more comfortable than the Swami Belt, and it’s probably more reliable overall. There are a few reasons why some climbers decided to stick with the Swami Belt, though:

In terms of design, the differences are rather obvious. During a fall, the Seat distributes most of the force on the wearer’s legs, while the Belt distributes it around the waistline. Whether you’d prefer one or the other is ultimately up to you.

How do you tie a Swiss Seat (aka a rappel seat)?

Basically, you should always carry around a simple survival kit with a carabiner and a 12-foot section of rope. These are the main ingredients, so to speak, for a basic rappel seat or emergency rappelling harness. It’s worth noting that if your waist size is larger than 32″, you’ll probably need a bit more rope. Therefore, practicing tying the rappel seat and knowing exactly how much rope you need for your body measurements is very important. Moreover, always make sure that there’s enough rope leftover to back up the Swiss Seat’s square knot.

Let’s move on to the actual steps:

Just in case you’re still a bit confused, I did some research and found a very useful video that details each step. When it comes to tying knots and emergency harnesses, visualization is key.

How comfortable is this rappel seat?

The Swiss Seat is not particularly comfortable, nor is it very flattering, especially for men. However, when compared to its alternatives, it offers a decent amount of support during a fall, which is why it is still the default choice of many climbers and climbing instructors.

Depending on your Swiss Seat rope length, you might end up with a bit too much slack at the end, and this could impact your comfort and performance somewhat. That’s why I always recommend tying up the harness and practicing repeatedly before attempting to use it in an actual emergency scenario.

The Swiss Seat is a dependable emergency rappelling harness, and it’s not the most difficult rappelling knot to pull off. However, keep in mind that this technique should only be employed if you have no other choice. These days, there are plenty of affordable rappelling harnesses available, all of which provide better protection and comfort.

Military personnel still use the Swiss Seat regularly as part of training missions and actual rescue operations. Apart from allowing them to rappel from heights in an emergency situation, the Swiss Seat can also be used to transport an injured victim to safety. Generally, these techniques are employed by experienced climbers, which is why I wouldn’t advise you to attempt it as a beginner. It’s not that you wouldn’t be able to rappel with it, but messing up a single step during the tying process could put your life at risk. For more information about rappelling knots and how to tie them, make sure to visit my comprehensive guide right here.

As always, if you have anything that you would like to add, or if you’d just like to share your own experience with improvised rappel harnesses, don’t hesitate to get in touch.

Until then, stay safe and enjoy the view!