Home For Beginners What Does Rappelling Feel Like? Here’s What to Expect 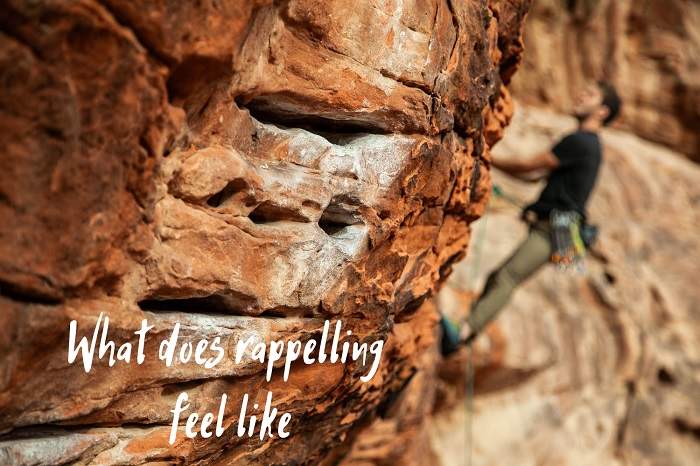 Rappelling represents a very important part of my life, and at times, I tend to forget that I was quite intimidated by this practice in my early years. Only recently it dawned on me that many of you might not even attempt rappelling because you simply don’t know what to expect from it. Naturally, different people will react differently: some are afraid of heights, others just don’t trust their equipment, while others can’t wait to get on with it and see what it’s all about. What does rappelling feel like? It varies from person to person, but I aim to break down some of the most common feelings associated with rappelling so that you might figure out what you’re most likely to experience before, during, and after.

Rappelling is not the same for everyone. It’s not supposed to be, as it’s an incredibly personal experience. While many of you might have someone nearby or even someone ready to rappel with you at the same time, in the end, it’s just you and the rope, the anchors, and the harness. Like it or not, the gear and the setup are the only things that are keeping you safe. This can cause discomfort, especially if you’re not used to taking serious risks. Because I didn’t want to write this guide from my own perspective alone, I reached out to some fellow climbers and asked them what they thought about rappelling and how it affected them the first time they went out and did it.

“The first time I rappelled was also the first time I had ever seen a route on the rock outside. That being said I was obviously very new and was learning side by side with my buddy on the sport route adjacent to me showing me how to do everything step by step. I remember being super nervous about double-checking every single thing I did and double, and triple, checking my entire setup before I unclipped myself from the anchors and went “on rappel”.

Even though I had already weighted the ATC at this point, it was such a relief when I unclipped my PAS and I hadn’t immediately started plummeting to the ground 30m below. After I began lowering myself and realized I was “safe” it was super surreal looking around and thinking that I was just hanging off the middle of a rope. For lack of a better word to describe an emotion, it felt like “freedom” because now I knew I could climb outside by myself (and a belayer).”

What are you most likely to think about before rappelling?

What can you expect to feel during the rappel itself? 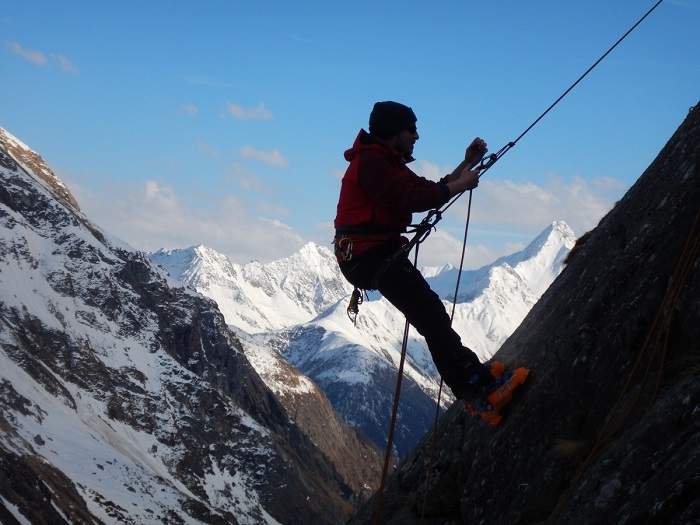 If you get past the initial moments of stress and worry right before you start the rappel, there’s one more obstacle that you need to prepare for: unclipping from your personal anchor system or PAS. This is a big one because even though you think your setup was done properly and you should theoretically be safe, you can’t know for sure until you unclip.

Once you unclip, you will quickly notice that everything is alright and that you are indeed safe. You might want to catch your breath for a bit or you might want to carry on with the actual rappel right away. As you rappel, and as you notice that you’re actually doing it properly, you might gain a surge in confidence. As Veenstra described it, you might even gain a sense of freedom.

The worst part is over, and now you can simply rappel at your own pace. For me, I remember feeling relieved and quite happy that I was doing what others would not even consider. I felt brave and confident, but I know I was only halfway done. I still needed to get down safely. The most common feeling associated with rappelling, in general, might be fear, but for me, it was excitement and wonder. I remember thinking:

“I must definitely do this again, but from greater heights, with more difficult obstacles, and maybe even at night.”

I only rappeled a few times at night. It’s far less fun and far more difficult, but that’s a story for another time. I wrote an article not too long ago about overcoming our fear of falling from heights, and I think I touched on some important factors. While fear of heights is your greatest enemy when it comes to rappelling, once you actually understand how the setup works and how it’s designed to keep you safe, you’re much more likely to be at ease. That’s why I recommend learning the basics and the intricacies of rappelling before you actually perform it. You will have a higher chance of enjoying the experience this way.

You have reached the ground. How do you feel?

Much like a child who threw a tantrum before getting on the Ferris wheel for the first time, you’ll probably say “let’s do it again” once the ride is over. It’s understandable: you’re much more likely to agree to a potentially dangerous experience if you’ve already done it beforehand.

Feeling relief and a sense of excitement is normal, but in some cases, rappelling might have the opposite effect. You might feel anxiety, and you might not want to try it again even if everything went according to plan. The descent itself might be too stressful, in which case, you might want to steer clear of rappelling or any similar activities.

Rappelling is an opportunity to learn things about yourself. About your limits and about your resilience. I’ve said it beforehand: it’s not for the faint of heart, and it does take some getting used to. However, you CAN get used to it, and you CAN overcome your fear of it with time and practice. Is it worth the effort, though? Only you can answer that.

There’s no guide in the world that can teach you how to feel in stressful situations, but we can always learn from others and at least have an idea of what to expect. The way you react to rappelling will depend on your personality and past experiences. The more you know yourself, the more you know what to expect, and the fewer surprises you’ll have.

If you have any experience of your own that you would like to share, feel free to get in touch and I might update this article accordingly. Until then, stay safe and enjoy the view!