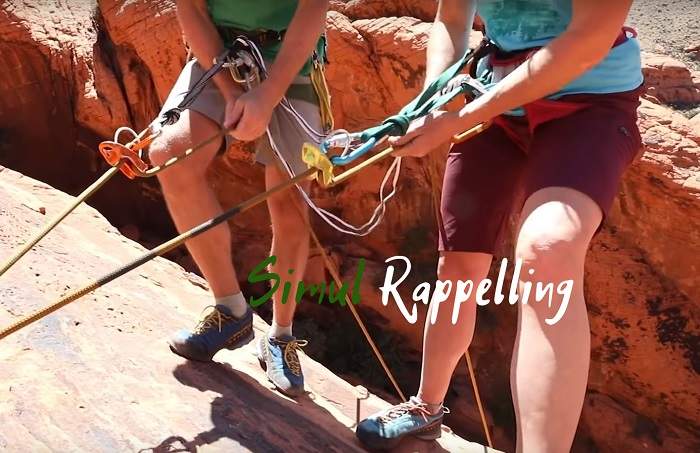 Today I want to talk about a dangerous and risky rappelling technique that has claimed the lives of many climbers over the years. Simul Rappelling is not for the faint of heart and it’s definitely not for beginners. It is employed rarely and only in extreme situations, such as rappelling off opposing sides of a fin or spire where anchor points are scarce or even nonexistent. These areas are relatively common in the Black Hills of South Dakota, for instance.

Just to clarify, I’m not here to encourage you to simul rappel or to attempt any dangerous techniques in general. However, since you’re here, it wouldn’t hurt to learn what simul rappelling is all about, how to practice it as safely as possible, and when to avoid it completely.

What is simul rappelling?

Simul rappelling or simultaneous rappelling involves two climbers descending one rope at the same time. As you can probably imagine, this brings with it a whole set of risks, which is why climbers need to be extra, mega, super careful when rappelling this way. You can’t afford to make many mistakes when doing this. Even the slightest error could prove fatal, and there are many accidents that can attest to this.

Apart from the scenario I mentioned above with the lack of anchor points, you might want to use this technique to retreat suddenly in the event of a serious storm. The applications are few, but it definitely doesn’t hurt to know how to simul rappel, just in case you might have to do it someday.

How to perform simul rappelling properly?

You will basically use the same setup as you would for a normal rappel. This means you’ll be clipping your device into the rope and you’ll let that rope slide through in order to achieve a controlled descent. The difference is that you won’t put both strands of rope into the device. Instead, you’ll take one strand and your partner will take the other. You will both descent at the same time, but each on his own line.

I also feel obliged to mention that this is an advanced rappelling technique that should only be attempted by experienced climbers. Here are some of the main things to keep in mind when simul-rappelling

Basic things you should avoid while simul rappelling.

If the terrain proves too difficult, it’s better not to rappel simultaneously. For instance, the ground itself could be loose, which means that you might end up throwing rocks or other pieces of debris onto your partner. Sharp edges could also prove devastating for ropes, especially given the added weight of you both.

You will need to stay relatively close together during the rappelling process. Make sure you’re not more than 15 feet apart (vertically). This way, you’ll be able to communicate easily and you run a lower risk of throwing rocks on your partner by accident.

Make sure the anchor is of top quality and is built properly. Consider the added weight of two people on the same anchor. If the anchor is not sturdy enough to support you, don’t rappel off it.

Don’t rely only on webbing for rappel anchors. Metal points or rappel rings can work better in some cases. The stress that webbing goes through during simul rappelling is amplified when compared to a conventional rappelling run. The friction and heat caused by the rope moving back and forth through the anchor could sever the webbing, particularly since two people now rely on the rope and anchor.

Here are some reasons why you should NOT simul-rappel.

Simul-rappelling is a rarely employed technique, but when climbers do use it, they use it to save time. However, it’s worth noting that there are quite a few other alternatives that are safer and that would still save you quite a bit of time. Furthermore, the more efficient you are at setting up your climbing gear, the quicker you’ll be able to get down, and the more time you’ll save.

For instance, you could practice using gear that’s more easily retrieved. Or you could also lose a bit of weight, which would make you quicker and more agile. Here are some of the main reasons why I would not simul rappel. Consider them as main risks, or things that are the most likely to go wrong.

One of the most notable accidents involving simultaneous rappelling happened in Mexico on November 27, 2019. Brad Gobright lost his life at 31 while simul rappelling with another 26-year-old climber named Aidan Jacobson. Apparently, the accident happened because the two failed to tie stopper knots at the end of the rope.

Most climbers do this because knots can get a rope stuck. Ironically, it seems that the rope got stuck anyway in this case. The two were about 20 or 30 feet above the ledge atop pitch five when they fell at the same time.

Jacobson only injured his ankle as a result, but Brad was nowhere near that lucky, as he fell more than 600 feet.

A visual representation of simul-rappelling.

The video below gives off a more detailed and visual representation of simul-rappelling. Hopefully, it will help you learn more about this technique. Some climbers prefer to simul-rappel still, while others consider the technique obsolete.