Home Tips and FAQ Should You Use a Paracord for Rappelling and Climbing? 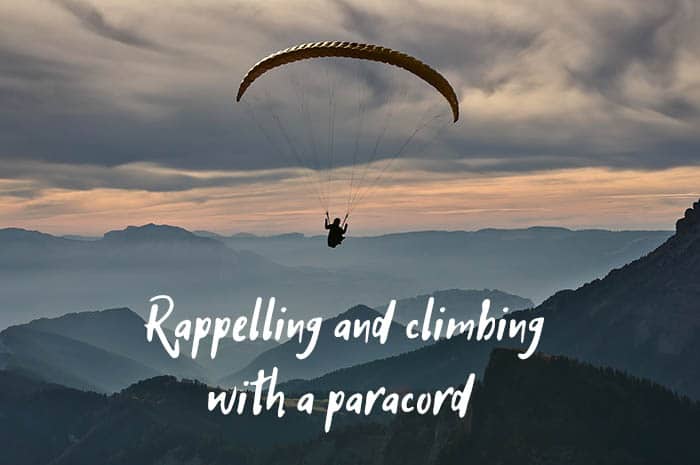 I often get asked if one could actually rappel or climb using a paracord, and while most people expect a simple Yes or No answer, it’s not always that easy to offer a clear response. That’s because the paracord was definitely not designed for rappelling or climbing, and yet some people have reported relatively successful attempts over the years. However, I will try to answer your question as quickly and as clearly as possible before I start explaining the what and the why.

No, you shouldn’t rappel with a paracord and you definitely should not attempt to climb using it, mainly because a paracord was mostly designed to support up to 550 lb of static weight. While you might be tempted to think that’s enough strength, keep in mind that you will exceed that threshold easily if you shock load the rope during a simple slip. Use a proper rope like the ones I told you about in my rappelling rope guide, or just learn how to tie a Swiss Seat if you’re in an emergency situation.

Now that we got that out of the way, let’s find out what is a paracord and why it has become so popular over the last few decades.

What is a paracord and what are its uses?

The paracord first came into use some time during World War 2, when soldiers used to be deployed on battlefields via parachutes. After they landed they quickly discovered that the cords used to keep their parachutes together could serve a variety of uses: tying objects to vehicles, measuring marching distances, and tying up camouflage nets to trees. Back then, it was called a parachute cord, but over the years, people have begun to see its uses outside of military applications.

What is the best paracord I can get right now? 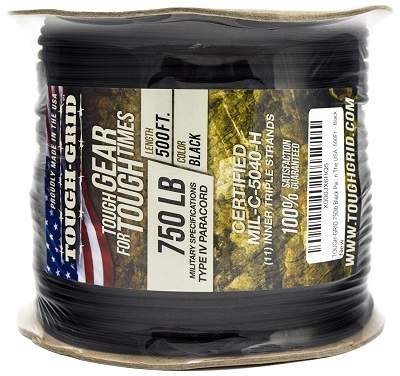 Paracord is generally cheap to buy and to maintain, but there are different types of it available on the market, and not all are well-suited for heavy-duty outdoor use. Generally, I’d advise you to go for the Tough-Grid 750lb Genuine Mil-Spec parachute cord, as that has the highest quality I’ve come across.

It is available in multiple colors, and in sizes ranging from 50 feet to 1000 feet. It’s the perfect prepper companion as it has a multitude of uses, and it’s pretty much guaranteed to perform admirably every single time. It’s not too expensive either, but prices do vary quite a bit depending on the length, of course. As an added bonus, this cord is manufactured entirely in the USA. It’s pretty much the strongest type of paracord that you’ll ever find, and that’s what you should be going for anyway. 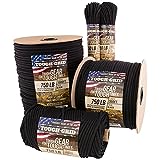 General details about the 550 Paracord.

There are a few things worth keeping in mind about the 550 Paracord, namely its construction type and tensile strength. This type of rope is actually a Kernmantle rope, which means that it has an inner core wrapped in a woven outer sheath. We already talked about its 550lb tensile strength – hence its name.

The cord has 7 inner strands, as well as a nylon sheath that includes 32 woven strands. This paracord usually comes in a diameter of 5/32″ or 4mm, and it is able to withstand rot and mold.

What are the other types of paracords?

While the 550 is the most common paracord type, it’s not necessarily the most reliable. There are three other types of paracord out there, namely Type I, Type II and Type IV.

Type I has a single inner strand and a tensile strength of 95lb. Therefore, it is commonly known as the 95 Paracord.

Type II has somewhere between 4 and 7 inner strands, and it boasts a tensile strength of 425lb. Yes, this is the 425 Paracord.

Type IV is the strongest paracord of them all, as it features 11 inner strands and is able to hold 750lb of static weight.

I should also mention the Mil-Spec Paracord or Mil-C-5040, commonly known as Military Grade. Just because it’s military-grade, though, that doesn’t mean that every Mil-Spec is a 550 cord. Each Mil-Spec needs to pass no less than 14 grueling tests before it can earn this certification. Moreover, the cord comes with a special identifier strand that proves its certification.

Is the paracord thick enough to handle a rappel? 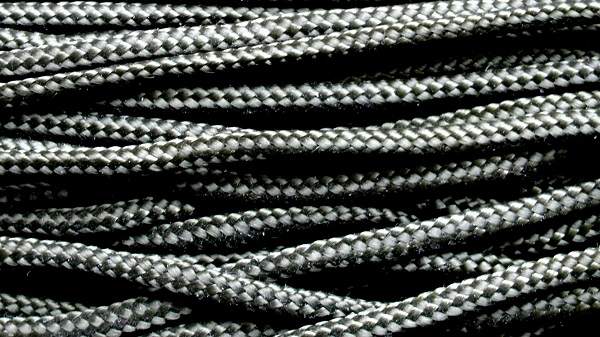 Apart from its relatively weak strength, a paracord is not well-suited for rappelling simply because it is not thick enough. If you use a GriGri or an ATC belay device, you can be almost sure that the strand will be too thin and the device won’t even touch it.

Furthermore, if you do attempt a rappel with a paracord, you’ll soon find out that the cord will start sliding through your brake hand faster than you would expect. Naturally, you’ll want to grip it harder in order to compensate, but this could result in some serious rope burn. Keep in mind that a paracord has only 40% of the surface area of a regular 10mm rappel rope. Even with the best rappelling glove out there, you still run the risk of burning your palm.

What about using a backup with a 550 Cord?

You might be inclined to avoid this problem altogether by using just the paracord instead of an accessory cord in order to back up the rappel. The problem with that is that if your primary device fails, you’ll only end up shocking the backup system. We’re circling back to the strength of the paracord, which will not be sufficient to absorb the resulting force.

Can you use a paracord instead of a climbing rope? 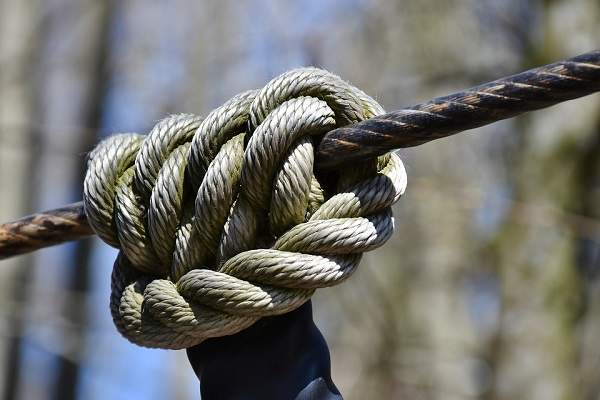 After all that I’ve said already about rappelling with a paracord, I think you would already expect it to be bad for climbing too. And you’d be right, but I’m still going to explain why.

At the risk of repeating myself, that 550lb rating is not enough to support your weight even if you, the climber, weigh far less than that. That’s because you will end up “weighing more” in the event of a fall, and you will stress the rope beyond its capabilities. Usually, the strength rating of the climbing rope should be somewhere between 10 to 15 times the weight of the climber.

This type of cord is also ridiculously easy to cut off even with a very small knife. Since climbing involves potential friction, one strand of paracord could easily cut another one if they rub off against each other.

As far as stretch goes, climbing ropes should not exceed 12% elongation, while the paracord needs to have at least 30%. While you might find this stretch percentage useful in some scenarios, you will not find it useful at all when climbing: the cord will just allow you to fall further until it actually stops the fall (or breaks). Just don’t use a 550 paracord as a protection rope while climbing. It’s not designed to handle that kind of stress, and it will most likely let you down every single time.

What about emergency situations?

If you absolutely have no choice and you have to perform a climb or a rappel with a paracord, at least make sure that you’re using the 750 Paracord Military-Spec instead of the 550 variant. That cord is considerably stronger and has a higher chance of helping you reach the top or the bottom in relative safety.

However, I would much rather you would learn how to tie a Swiss Seat and just use that with a conventional rappelling rope instead. You CAN tie a Swiss Seat with 550 Paracord, though, just make sure that you know how to do it properly.

A paracord is definitely not the best tool for the job if you’re looking to climb or to rappel, but it does have other important uses that you could take advantage of. Carrying this type of cord with you is never a bad idea if you’re going hiking or camping, but definitely replace it with a proper rope if you plan to perform more serious tasks.

I hope that you now have a better understanding of what a paracord is and what it is best used for. If you have anything that you would like to add from your own experiences, feel free to speak your mind in the comments.

Widely practiced by climbers, mountaineers, cavers, and canyoneers, rappelling is one of the world's most exciting experiences. Rappelinfo is here to provide useful guides and tips when it comes to choosing the best destinations and the best gear, so that you may perform this activity safely and securely. We also create content about mountaineering, hiking, climbing, and canyoning, as these activities are often related to rappelling. Rappelinfo.com is a participant in the Amazon Services LLC Associates Program, an affiliate advertising program designed to provide a means for sites to earn advertising fees by advertising and linking to Amazon.com.
Contact us: contact[@]rappelinfo[.]com
All Rights Reserved by Rappelinfo © 2018 - 2022
We use cookies to ensure that we give you the best experience on our website. If you continue to use this site we will assume that you are happy with it.Ok