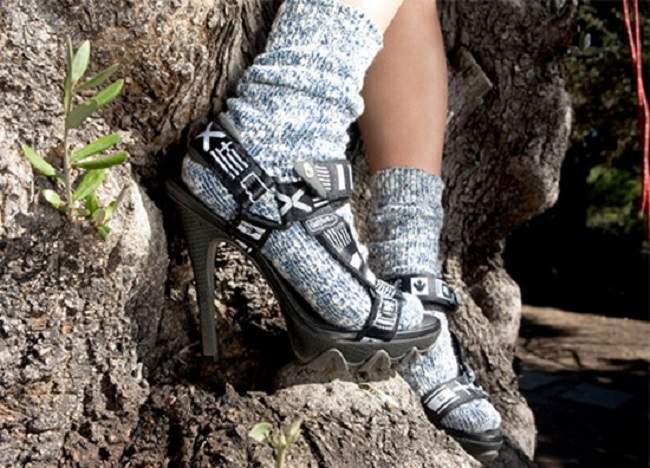 Should you even attempt to perform a climb, hike or rappel while wearing high heels?

Normally I’d think the answer to this question would be obvious, but after I witnessed a series of successful attempts by some very skilled ladies, I changed my mind. Climbing and hiking in high heels are both completely doable as long as you’re used to walking in this kind of footwear, but the secret to a successful climb also relies on your skill and experience.

I wouldn’t generally recommend heels for any outdoor activity. They affect your balance, your posture, and your overall speed. However, when it comes to climbing, you’re mostly using the tip of your foot for grip anyway, which means that the heel doesn’t generally get in your way too much. By wearing heels during a climb, you’re forcing your weight onto your toes, which you should be striving for anyway. As long as you don’t try to grip anything with the heel, or you don’t accidentally hook it onto anything, you should be fine. Well, mostly.

Naturally, climbing in heels is going to require some practice if you actually want to do it right. Why would you even want to do it in the first place? Maybe you lost a bet, maybe you have something to prove, or maybe you just want to challenge yourself in a rather unique fashion.

A few years ago, a professional rock climber named Sierra Blair-Coyle posted a video on her Instagram page that showcased her very impressive climbing techniques in heels. Apparently, the whole point of the demonstration was for a fundraiser. Very impressive either way if you ask me. You can watch the video yourself below.

Proof that women/men can do anything in high heels 😉 Great fundraiser for the @accessfund last night!  Thank you for putting this on @focusclimbing 🙂

As you can see for yourself, she was actually wearing a pair of red high heel sandals without any socks. I don’t think the soles on those shoes offer much in the way of traction, but she did a very good job making the most out of them as she climbed to the top. This was an exhibition climb, true, and it happened indoors in a controlled environment.

If you do want to attempt a similar climb yourself while wearing high heels, make sure that it’s a short climb, and wear as much protective gear as you can. Since high heels aren’t designed for this kind of activity, they increase the chances of something going wrong. Oh, and don’t even think about attempting this if you’re a beginner unless you’re a fan of sprained ankles or worse.

Also, I wouldn’t advise you to wear any socks if you plan to wear high heel sandals, and hosiery is definitely a no-go as it will minimize the grip between your sole and the shoe. Don’t attempt a climb in stilettos, mules, or flip flops. Don’t attempt this with platform shoes either, as you want your toes to be as close as possible to the rock surface.

My advice is to use a chunky heel, preferably with some rubber on the bottom. Find a reliable brand, and make sure the shoes are sturdy. In other words, don’t cheap out on this! If I’d have no choice, I’d probably go with some chunky heel Timberlands. 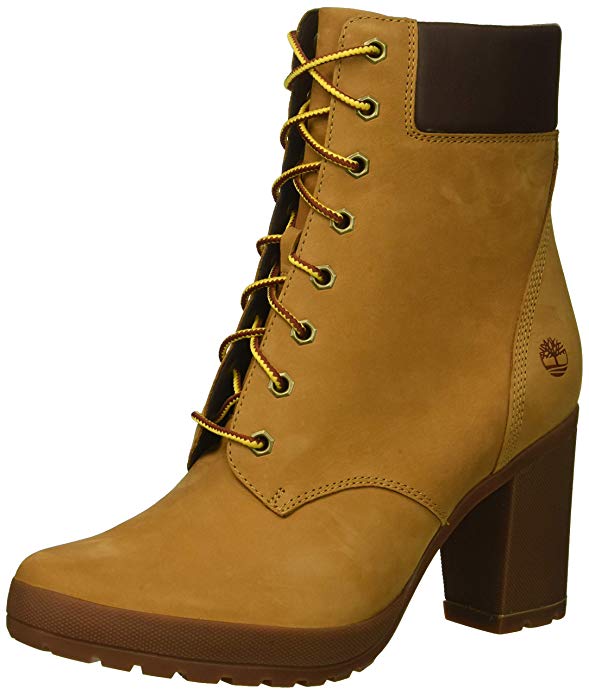 These are 100% leather boots with rubber soles, and the best part is that they’re completely waterproof, which means that you can wear them in humid conditions. They’re available in three colorways, namely Black Nubuck, Wheat Nubuck, and Medium Brown.

The 6-inch heel is not too high for a casual boot, but it is a bit on the high side for a hiking and climbing shoe. it has rubber on the bottom, though, which is what you want, and it has a nice chunky shape for extra peace of mind. The gap between the heel and the sole is wide enough to accommodate a rock or other natural anchors in a pinch. Don’t get used to that technique though!

What about hiking in high heels?

Hiking is a different story because it involves less verticality. There are actually quite a few high heel boots out there that could work for a short hike. The only thing you need to watch out for is tripping and keeping your balance. Other than that, I think the added height can actually come in handy on the trail.

Hiking in high heels might prove difficult for someone who is used to wearing flat shoes most of the time or all the time. However, if you’ve been wearing heels for a while, you’ll definitely go through a shorter adjustment period. As I mentioned before, you still have to watch out where you step, but hiking in heels is definitely easier if you’re already used to this kind of footwear.

As for my personal recommendation, I’d go for a wedge heel mid-calf boot for a bit of extra safety. Hey, it’s still a heel, even if it’s not a stiletto. 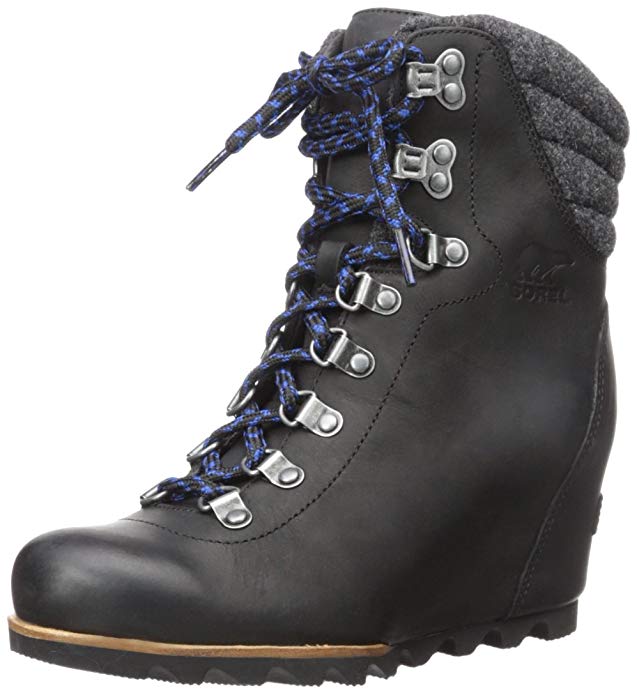 Sorel makes incredibly comfortable footwear, particularly when it comes to boots. This great-looking wedge mid-calf boot is named Conquest, and it comes in a variety of different colorways and trims. Each pair is made out of high-quality leather and durable rubber for the sole. Traction is great on both snow and ice, which means it could work for casual treks during the cold season.

The full-grain leather on the upper side of the boot is completely waterproof. The collar is made out of pigskin, and the lining is microfleece. As for the wedge, it’s a molded BPU-PU, while the footbed comes with a heel cup and arch support, fully removable.

Keep in mind that the Sorel women’s Conquest wedge boot is not designed with sports in mind, but it will hold up nicely if you decide to rough it around a bit. While it’s not a hiking boot per se, it offers a decent amount of grip and comfort. I don’t know why you’d want to hike in heels, I’m not going to judge and I’m not going to discourage you. If you do decide to go for it, though, let me know how it all went down!

Oh, and here’s another video of Danielle DeLaite climbing an artificial wall with free-climb expert Chris Sharma. She’s wearing a pair of black high-heel boots, and she’s doing a very good job despite of this. I don’t know why she chose to do it like this, though. I really don’t.

Rappelling in high heels. Is it a good idea?

Definitely not, and I’ll tell you why: your feet will not sit in a natural position during the descent, which will limit your grip while affecting your balance. No matter how expensive your heels are, they’ll let you down if you attempt to perform a rappel while wearing them. You might get lucky, true, but then again you might not, and is it really worth the risk just to put on a show?

I’ll admit, footwear is less important if you perform an inverted rappel, mainly because you’ll be using your hands to control your descent. But this is crazy talk anyway, and I’m sure nobody ever thought that rappelling in heels would be a good idea. I think it doesn’t hurt to reinforce the craziness of this idea. Seriously, don’t attempt it!

While climbing and hiking while wearing high heels are both doable, I don’t see a very big demand for it, and for good reason. Walking in heels is uncomfortable enough as it is, no need to add the extra strain of climbing into the mix. Rappelling using the wrong footwear can be dangerous, though, and even life-threatening.

This is definitely not an article that I thought I’d be writing on this blog, but a bit of extra information never hurt anyone. I never attempted to climb or rappel in heels, and I don’t think I’ll ever try it out unless it’s for charity or something. If you want to do it right, be sure to check out my complete guide of the best climbing and rappelling shoes out there. There are some high-quality suggestions in that article, and I stand by each and every one of them.